"Barbara Goldsmith (Trustee 1994-2011) -- one of the many gifts Andrew Heiskell gave us was you. He brought you onto the Academy board soon after he himself joined us. He said we could not do without you with your fine reputation as a writer, your expertise on libraries, your well-known commitment to rare book conservation, your enormous following of friends, and your brains! He was right about all of it, and now you, too, are indispensable and beloved. Thank you for all you have done for us, for the Barbara Goldsmith Rare Book Room, still the top facility of its kind in the city of Rome, and the pride and joy of our library, and a safe haven for our readers, Fellows and friends!"

Barbara Goldsmith is a noted author and historian. Her award-winning books include The Straw Man, Little Gloria…Happy at Last, Johnson v. Johnson, Other Powers: The Age of Suffrage, Spiritualism, and the Scandalous Victoria Woodhull, and Obsessive Genius: The Inner World of Marie Curie. She was a Founding and Contributing Editor of New York Magazine, the Senior Editor of Harper's Bazaar, and writes for The New York Times and The New Yorker. Ms. Goldsmith has received four doctorates and is both a Doctor of Literature and Humane Letters, honoris causa. She is the donor of the Preservation and Conservation Divisions of both The New York Public Library and New York University and the Barbara Goldsmith Rare Book Room at the American Academy in Rome. Among her many awards, she was appointed to the President's Commission for the Celebration of Women in American History. She is the recipient of the Lifetime Achievement Award in the Literary Arts of the Guild Hall Academy of the Arts, the Poets and Writers "Writers for Writers" award, the American Publishers Association Literary Award, and the Order of Merit of the Polish government for her work on Marie Curie. Ms. Goldsmith served on the New York State Council on the Arts, the Commission for Preservation and Access and Permanent Paper Task Force of the National Library of Medicine. As a crusader for human rights, she is donor of the PEN Freedom to Write Awards. She is a Trustee and Literary Lion of the New York Public Library, a member of The Council on Foreign Relations, the Authors League, Authors Guild of America, and Poets and Writers. She has received a Presidential Citation and has been elected to the American Academy of Arts and Sciences. Goldsmith was designated by the New York Landmark Conservancy as a “Living Landmark”. 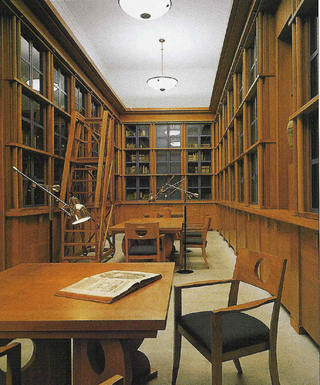 The Barbara Goldsmith Rare Book Room at the American Academy in Rome.

A jewel at the American Academy in Rome is the Barbara Goldsmith Rare Book Room which houses 35,000 volumes of books dating from the early sixteenth century covering the fields of Classical studies and the history of art and architecture. This room was designed by Michael Graves (FAAR-'60) with technology on book preservation and conservation supplied by Barbara Goldsmith. The room has no noxious substances whatsoever and consists of floors of carrara marble and cabinets of pear wood. Even the unpolished steel hinges on the cabinets have been designed by Graves to open 120 degrees so no books are scuffed coming out of the shelves. All the bookends are covered in acid-free permanent linen and book boxes are provided for the most fragile papers. There is a restoration and conservation division that works constantly to keep the American Academy's illustrious rare books in good condition.

The Barbara Goldsmith Rare Book Room serves as a pilot project for both European and American scholars who come from many venues to see the construction and techniques used therein. It is patterned on the Brooke Russell Astor Room at the New York Public Library and was supervised by Christina Pugliese, who also supervised construction of the Astor project. Graves's scrupulous design and Goldsmith's international knowledge of paper preservation and conservation have made the Barbara Goldsmith Rare Book Room a indispensable part of the American Academy. 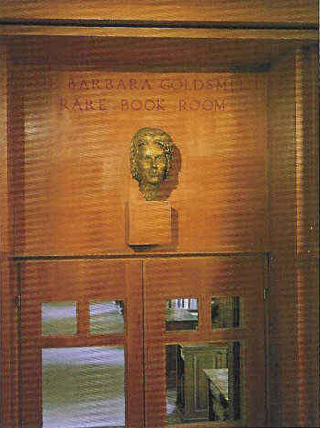